I’ve been wanting to run an Aravaipa Race for a long time now.  They seem to have so many great races and I really wanted a chance to experience one for myself.  As soon as the 2019 Black Canyon 100K race opened for registration, I talked several of my local running friends into signing up and join the fun.  When I got a chance to meet Jamil Coury at Western States in 2018, I told him we had a big group coming from Georgia for the Black Canyon race.  A lot of us signed up, but many didn’t actually make it to the race, due to injuries.

We flew out to Phoenix on Thursday before the race so we could settle in and have Friday to rest and go to packet pickup.  We had a good dinner and went to bed early for the early race start.  Due to heavy downpours that occurred on Thursday, they had to re-route the course at the last minute.  Huge shout out to Aravaipa Running for all the work that went into that and how smooth the whole race went.  They have tremendous volunteers with very well organized aid stations.  Runners had plenty of options, no matter what your diet might be. 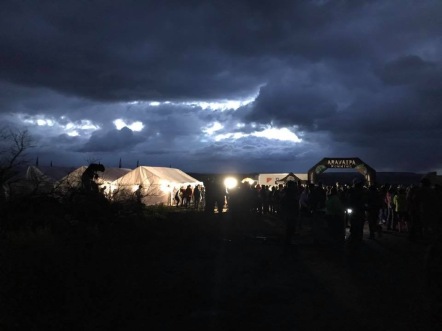 Because Black Canyon is a point to point race (which, by the way, is one of my favorite race types), we were shuttled to the starting line.  The temps were pretty cool but not crazy cold.  We left our drop bags, used the bathrooms and started the race right on time. 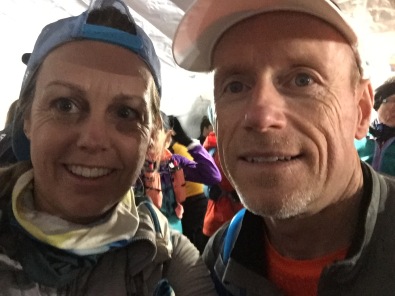 David and I hung out before the race 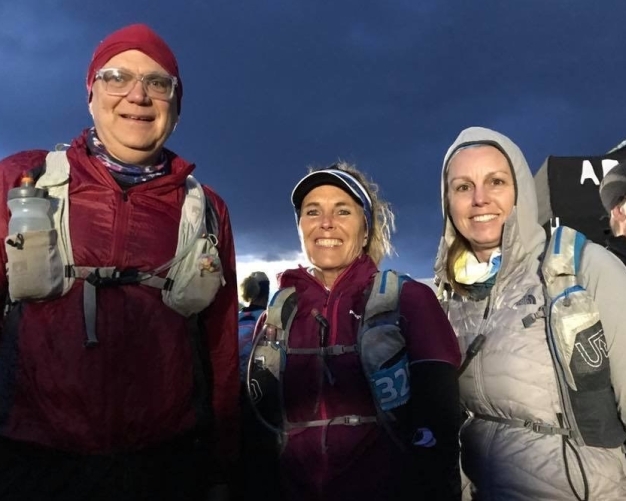 John, Stephanie and I all started together

Black Canyon is a race that easily lulls you into thinking it will be a fast and easy run.  It essentially starts with a lot of very non-technical trails that are mostly downhill.  Many runners might find it difficult to keep from going out too fast and crash later as the day warms up.  Stephanie flew out from Knoxville and we once again got to enjoy the trails together.  She is much better at setting a manageable pace at the beginning than myself.  I’m one of those runners that goes out too fast and doesn’t settle into my own pace until much later.  I have been dealing with Piriformis Syndrome for several months and while it is much better, there was the real possibility of it being a long painful day.  I knew I had to let Stephanie lead and go easy.

The start turned out to be windy and cold, with a little rain, but it soon cleared away into a very beautiful and comfortable day.  I was enjoying my morning and the beginning of the race until somewhere around mile 10.  I began to get that uncomfortable feeling in my Piriformis I had been dreading.  I was also beginning to have trouble keeping pace with Stephanie, although I could see she wasn’t far ahead on the beautiful winding trails through the desert.  I chatted easily with those around me and enjoyed the beautiful Black Canyon Trail.  Somewhere before mile 20 and the Bumble Bee Ranch Aid Station, I began to think I needed to tell Stephanie to leave me and thought my day might be much rougher than I wanted it to be.

Luckily, as it often happens, you get a little renewed at the aid stations.  At this aid station, I ended up getting to meet, and got help from, a Facebook friend who I knew from Ginger Runner Live!  That seemed to change my mood.  Stephanie and I chatted and I told her my fear of keeping up with her, but she assured me she didn’t want to go any faster. 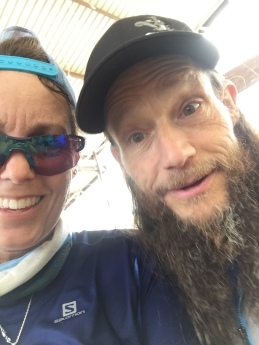 I left that aid station feeling good, and Stephanie and I enjoyed some beautiful views and took a few pictures in the next section of trail.  Running through the desert is so different from our normal runs so we both took it all in.  I think we both felt a little unsure if we would be able to finish with a sub 17-hour time, which is the requirement for it to count as a Western States Qualifier, but we didn’t discuss those thoughts.  Our goal was to move forward.  We are both solid runners and hikers, and this course was very runnable.

After we got to the Gloriana Mine Aid Station (mile 23), the trail got much more technical with lots of rocks.  Most of the race was on single track and often had a good bit of rocks, but those are some of my favorite trails.  As long as we kept running steady, my Piriformis remained uncomfortable but not unbearable.  I wasn’t as fast on the hills, but with Stephanie pulling me along, I seemed to have my moments of rallying.   It was also fun in this section as we began to see the top runners racing for the Western States Golden Tickets and cheer them all on.  We made it into the Black Canyon City Aid Station (mile 35) where the reroute of the course began.  At this point we had to do a 4 mile out-and-back section before we would head back to the Gloriana Mine Aid Station and back again to finish. 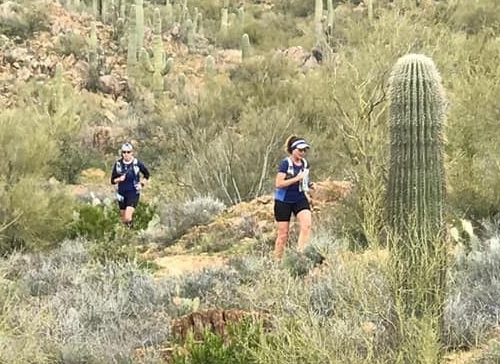 I saw Michael and Rebecca Richie just before getting into the Black Canyon City aid station who said David was behind them at the aid station.  Stephanie and I made a quick stop and we headed out for our 4 mile out-and-back.  I didn’t have time to look around and say hi to David.  A mile or so out from the aid station we ran into John, who was headed back into the Black Canyon City aid station.  He also updated us that David was roughly two miles ahead of him.  So everyone was doing well.  Stephanie and I began to set small goals for ourselves.  We wanted to be back and leaving the Black Canyon Aid Station by 5:00 pm.  We kept moving and were happy to make our goal.  We now began the 11 miles back to Gloriana Mine aid station, and then return the same 11 miles back to the finish.  There was a lot of climbing and some big hills midway through this section.  We just broke it down into small pieces and took it one step at a time.  About 4 miles or so from the aid station we passed Michael and Rebecca again.  They told me David had slowed down but they were doing great and everyone was in good spirits.  We kept our eye out for David and John as we were on the last section leading into Gloriana Mine.  We finally came across John who again said David was in front of him by a couple of miles.  In the dark, we had somehow missed him but that wasn’t so surprising.  This section became a little tough in the dark and then you were constantly passing other runners on the single track.  We tried not to shine our lights in the other runner’s faces but it was a constant passing game that seemed to slow us down.  This was one of the downsides to having an out-and-back course with 700 registered runners!  We reached our next goal of getting to the aid station by 8:00 pm and were happy to be headed back to the finish.  We now knew we would easily make the sub 17-hour time we wanted.

Stephanie continued to lead us at a good pace through the technical trails and back to more runnable dirt road sections.  We were able to dig deep and run much better through this section than we had the previous time.  We both seemed motivated to not just finish but finish strong.  We were thrilled to finished in just under 16 hours and meet our goals.  I would like to think we worked together, but I know it was all Stephanie.  She pulled me along and paced us the whole race.  We’ve covered a lot of miles together over the last year or two, and hope we have many more miles and adventures together.

This was a very well run race by Aravaipa Running and I hope to do another one of their races again sometime soon! 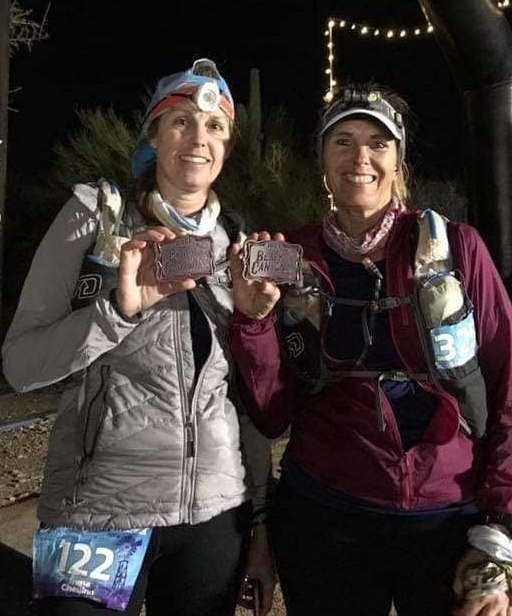