This was a hard one.  Well, all of them are hard, actually, but it does seem like some are harder than others.  Sometimes it’s just not our day.  Maybe we are tired, our nutrition might be off, our mind isn’t quite with it, or for whatever reason the run just seems like such a struggle.  We can try to just enjoy a beautiful day for running and some beautiful scenery, but it’s hard to enjoy that while our head is focused down on the trail.

I had a goal, a plan.  I even shared it out loud.  Normally I don’t share a goal.  It’s like bad luck – I might jinx myself or something.  But there you go, I said it out loud – I really wanted a sub 6 hr finish.  This would be my third time running this race.  It’s 26 miles with 7,000 ft of elevation gain, lots of single track technical trails (my favorite), long stretches of rocky fire roads and some gnarly downhill sections.  Previously, my best time was 6:16 and each time I’ve run it, I’ve also been the Grand Masters Female 1st Place Finisher.  This year I have been training with a coach and felt like I was stronger and had a good chance of reaching my goal.  I also asked a couple of my running friends, Bill and Loren, if they would pace me.   I knew with a little push, I could stay running on sections I had walked in previous years, and that should help me reach my goal.

Promptly at 8am, the race started with a bang, literally from a cannon.  Like most races it started out on a short road section before entering the trails, then within a mile or so the trail narrows to some single track and very technical sections.  This is my favorite part of the course, but today it took me several miles before I felt like I really settled into a comfortable pace and run.  I know I’d pushed myself up to the front a little more than normal and was running strong with my two friends, Loren in front setting the pace and Bill just a few steps behind me.  We all stayed together and pushed through nearly 5 miles of trails before Bill took the lead and moved further ahead.  He had been struggling with stomach issues all week and I knew he was not feeling great, so I was happy to see him push ahead and find his own groove.  I also knew Loren would continue to set a good pace and help me to push even when I didn’t feel like it.

At each aid station, we got an update on how far Bill was ahead of us.  Sometimes it was a couple minutes, and later it was more like 5 or 6 minutes.  He would leave word that he expected us to catch up to him as he continued to struggle with his stomach issues, but he seemed to be having a great race anyway.

I really was having a good time

Around mile 9 or so, I turned my ankle.  At first, I wasn’t sure just how bad it was, but I was able to walk it off within a few minutes and begin to run pain free again.  It did, however, make me more cautious so I wouldn’t turn it again.  This wasn’t my “A” race and I knew I didn’t want to injure it seriously.  After the mile 10/11 aid station, the fun really began with a steep power line climb and then a downhill that is called the “downhill of despair.”  I guess that should be description enough.  I was hopeful that once we finished the downhill section, the trail would smooth out and the fire roads would not be quite so technical – a little easier running.  But instead, we experienced more rocks and technical sections that made it difficult to settle into a comfortable stride.

Once we went through the next couple of aid stations that seemed to come quickly on the fire roads, we came to what’s known as Conte’s climb.  Most local ultra trail runners and any GUTS Member (Georgia Ultra and Trail Running Society) knows who Franco Conte is.  I’m sure his ears are burning as many of us go up this long climbing section named after him.  The climb isn’t hard because it’s so steep, but because it’s so very long.  Most Georgia runners are used to hills.  We run on them almost daily, and they are usually short and steep.  Long steady climbs that never seem to end are not our specialty, in most cases.  Two weeks earlier, I had been in the Grand Canyon, so this was right up my training tree.  I had this one.  Loren and I were looking forward to reaching  the Last Gasp Aid Station, but it just seemed to take forever.  By the time we got there, I felt I was a little past my Last Gasp.  We caught and passed a few runners here as we headed into the last section of rolling hills with more climbing.  By now, I’m just ready to be done.  Loren pushed us forward and I kept running even when I really wanted to just walk it in to the finish.   I knew I had to keep pushing to stay with him.  He kept track of our time on his watch and let me know we were doing great, but I didn’t really want to know exactly how we were doing.  As long as we were good, that’s all I needed to know.

Soon we were at the top of the power lines, headed down them and into the home stretch.  We both moved as quickly, but carefully, as possible.  We quickly checked in with the aid station crew at the bottom of the hill, and were off around the lake to the finish line.  I told Loren it would take all his strength to push me in, because I was done.  I kept moving forward, trying to finish as strong as I could. 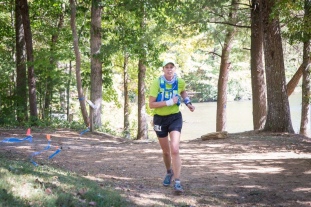 This was all the push I had left in me

I wish I would have been smiling as I crossed the finish line, because I could not have had more fun.  I got to run on a beautiful course with absolutely perfect running weather, and I spent time with a couple of my favorite runners.  But I was spent.  I gave it all I had that day.  Maybe on a different day it would have been more.

It took a couple of days before I realized I did reach some of my goals.  I did get a PR on the course by 9 minutes, finishing in a time of 6:07, and I was once again the Grand Masters Female 1st Place Finisher!