Holy Humidity Batman! I don’t even know where to start with this race!

Jason Green from Yeti Trail Runners hosts a Yeti Snakebite 50/50 each year at Sweetwater State Park in Lithia Springs, Georgia.  He changes it up each year usually offering 50K and 50M options thus the 50/50 and it’s held the last weekend in August.  August is not known for cool fall weather in Georgia! This year he changed it up and decided a 50K all at night would be a fun, so you had a 50K or 11 miler option!  This would be my 3rd year running the Snakebite 50/50.

Oh and another fun little change this year would be that the looped course (3 loops) would cross a river with a promise of an awesome island Aid Station in the middle.  Now how could this not be the best race of the summer!  If you’ve ever run at Sweetwater State Park, which most of the local ultra runners have all done at some point, you know the trails can be technical and sometimes challenging.

Pre-race photo with Loren, Lisa, Carrie, myself, Stephanie and Mark

As with most races, we started our course with a short distanced on the paved road to a fire road that led us down to a large bridge crossing the river.  I know Sweetwater Park pretty well and have run at some point on most of the trails/roads through places Jason finds for us to run.  So the race really started out in very familiar territory for me.  I knew the trails, I knew the climbs and felt very comfortable with his course markings.  But as fate would have it, running in the heat, horrible humidity and the dark of night at Sweetwater would not be the easiest thing I’d ever done.   The race had started at 7pm so it would be an hour and a half before we were forced to turn on our headlamps.  I was hoping to get as much of the first loop completed before it got dark, thinking this would be very helpful in following the flagging and knowing my way during the dark night loops.

The island Aid Station was everything I’d envisioned, filled with several of my favorite running friends, island music, Christmas lights and a rope to aid our crossing.  A water station for refills was on the other side of the river crossing.  Once across the river during the first loop I felt again comfortable I knew my way around the main trails of the park, but of course a turn onto some trails I hadn’t been on before (or didn’t recognize at night) changed that.  A little extra distance getting off course and missing a turn told me that this had potential to be a long night. 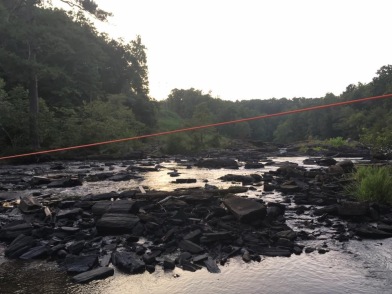 I came in off loop one having run it with Stephanie Johnson, Loren Starr and Tony Taylor for the most part.  Stephanie was struggling with ITB issues and many of my friends and fellow runners were hanging at the Start/Finish and were dropping after the first loop.  Loren was having stomach issues, my Rock Starr friend had run a 20K that morning so he’d already run his A-race for the day, I’m guessing.  The volunteers were trying to get us out of the aid station, probably trying to keep as many moving as possible, so Tony agreed to run with me and we headed out for loop 2.  I had grabbed some cold Coke from my cooler before we left.

I really had no idea of our mileage or what time it was.  I’m usually paying close attention to that during my races but I had my watch setting on “bike” mode when I first started and after changing it a few miles into the course, I just didn’t bother looking at it.  Tony kept track on his and he would occasionally tell me we were doing good, but I asked him to keep the details of what that meant to himself.  All I really wanted to know was we were in good shape!  Well sort of. The second loop was really a mental funk for me.  My stomach wasn’t great but I can’t say it was terrible, I felt tired and just sort of generally struggling to stay focused.  It just seemed like a mental push.  During our second loop Tony and I helped another runner who kept missing the turns.  The course was marked well, but the night was very dark and it was easy to miss them if you didn’t either know exactly where they were or look up very often.  The technical course kept you looking down and I was lucky enough to be familiar with where we were most of the time.  After that our new friend Joey, decided he’d stick with us.  When he asked us if it was ok if he tagged along I remember Tony saying that’s how we roll, no problem.  Joey had drove down from another state just to run a Yeti race and we enjoyed his company for the remainder of the night.

The water crossing on the second loop helped turn things around some for me.  I still wasn’t feeling great but usually about half way through a course, just mentally I can get to a better place.  Because that AS was so remote there was very limited water there and this time through it was all but gone.  We managed to get a small amount from the bottom of one container.  We were fortunate as others behind us got none.  So sorry guys if we took the last of it.

The humidity of the night was really tough.  We got back in after our second loop and just knowing we had only 1 more loop was mentally a game changer for me.  After getting more cold Coke from my cooler, we were getting ready to head out when Stephanie and Loren came in together.  Loren was now really having stomach trouble and dropping, Stephanie said her knee was feeling better and wanted us to wait before we left for the final loop so she could join us.  Stephanie quickly grab something to drink and a bit to eat and caught up as the AS volunteers were again trying to get us all back out on the course.  Being the start and finish area it was very crowded.  If you haven’t done a looped course before, sometimes it becomes more like a party there later in the race and let me tell you, the idea of heading back out for another hard loop in the dark isn’t always the most appealing prospect.  I know some runner who don’t do looped races for that very reason.  It’s just too easy to call it a day (or night as it might be) and quit.  And if you know the Yeti Runners, it’s all about fun and beer!  So hey, there’s that too!  But off we went.

Last loop, we got this!  Our group was now 4 as we headed back out for the final time.  Everyone seemed to be feeling much better and ready to finish.  It’s always nice when you are on a final loop and you know it’s the last time you’ll have to do that climb or section again, and with each mile further into the loop, you’re that much closer to being done.  Another friend of ours, Richard had “leap frogged” with us the entire night and shortly into our loop became the 5th runner of our little group.  The power lines and the hills were tough climbs but we all found energy to run the downhill’s and flatter sections.  We looked forward to the water crossing one last time and everyone really just wanted to go for a swim at that point.  The water was pretty warm and not so refreshing but by the final crossing it felt a little cooler.  And this time through there was water at the AS although we were all well stocked knowing they probably wouldn’t have any.  A quick drink and we were up the hill and off towards the finish.  We again found our energy to run the flatter sections, avoiding the roots and rocks in fear of wiping out during the final stretch, as we headed to the finish and one Big A$$ finishers medal!  Yeti’s do it in style!  Awesome job Jason! 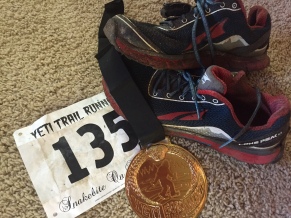 Yeti Trail Runners, Not a Cult!