A short back ground story here, it will make sense later in my race report, I promise.  So in May, shortly after signing up for this race, I crewed for a friend at Cruel Jewel 100 in Georgia.  If you’ve crewed for a runner in a 100 miler before, you realize you get to know some of the other runners out there and often help others along the way.  Several runners happened to be within an hour or two of my friend and I began to chat with them all and get to know them.  By the half way point in the race, I was crewing and helping other runners who needed a hand.  One of those runners came into an aid station carrying a large stick as a walking pole.  Without even a thought I asked him he wanted a pair of poles to use, which he happily accepted.  When I told my husband (who was not an ultra runner at the time) scolded me saying I would never get them back, they were brand new $150 ultra lite poles.  “Oh it’s ok, I’ll get them back.  I’m not worried. They all know me at the finish and trail runners are the best people.”  And yes, I did get them back and was happy to be there and see that runner cross the finish line and so many others who I had helped along their journey.

On to Habanero 100M/100K which was appealing because of the generous 30 hour cutoff for both races.  The race also had relay teams doing  both distances, along with a 50K race as well. This was a brand new racing event being put on by TROT (Trail Racing Over Texas).  It was located just outside of Austin, Texas at Buescher State Park.  A running friend of mine who lived in Texas had pointed this race out to me in April and for my birthday in May, I bought my plane ticket and signed up for the 100K race.  This was huge.  First, I’d never traveled out of state for any ultra race before and secondly when I first signed up, I had no crew or any other help.  Let’s don’t even talk about how it’s an August race, in Texas and it starts at noon! Did I mention in TEXAS!  Ok, I thought I did. Could this sound any tougher.  And no one seemed to want to join me on my journey.  Carrie? Lisa? Nope they aren’t interested in Texas in August!

So it was a long hot summer of heat training in Georgia. Most of the time Carrie and Lisa weren’t even interested in joining me for those races or run.  I had also managed to talk a non-running friend, Joyce into joining me in Texas and crewing for me.  She would be a great cheerleader and get to see my sport close up. It was a 7 mile looped race so I figured I’d set up camp, basically crew myself with some help Joyce and it would be no problem.  Well except for that nasty Texas heat!

Another little side story.  One of the things I thought was really cool about this race and the race director, they offered you a chance to pick your bib number.  Well if you made a donation to their sponsor, which was a group that helped children who had lost their fire fighter parent.  My husband, being a firefighter himself, was inspiration enough for me to want to make a donation to this great cause.  Such respect for these guys and all they do, and I love to support their families as well.  Now that I made a donation, what number would I choose?  I don’t really have a favorite number.  Between 1-500 any number.  So I chose 343!  Why?  Well 343 is the number of fire fighters lost on 9/11.  I would wear that number in honor of the fire fighters lost on that horrific day in our history, and I would wear it proudly. 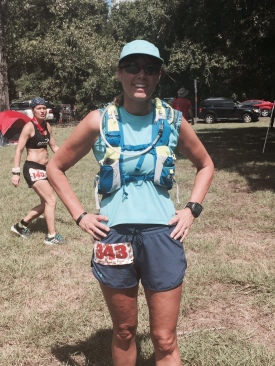 I flew into Austin with my friend the day before the race.  We had a hotel set about 20 minutes from the park where the race was taking place.  One friend who I did know from an online Female Ultra Running FB group was running the 100 miler.  So I did feel like I had a friend and was excited to meet her in person.  We drove out to the park the day before, picked up my pack and took a look at the camp set up.  Nice grassy area, nice bathrooms, it all looked promising.  I met my friend Rachel in person and was ready to get a good night’s sleep and be ready to run the next day.  I did mention it was a noon start right?

I bought several Styrofoam ice chests for my stuff.  Cold Cokes and Ginger Ale in one, Ice for my pack in another, mint ice water in one for my bandana and Popsicles in another.  I felt like I had unloaded an endless supply of stuff at my camp site and everyone in Texas thought I was crazy.  But I’m a planner and I knew what I wanted.  Now this racing group, TROT had two of the best aid stations I’d ever seen!  They always had lots of ice and endless amounts of food, but I like to have what I know I’ll want just in case. Really folks, it’s 107 degrees out there.  I can’t remember how many thousands of pounds (yes 1000’s of lbs) of ice the race went through, I personally used over 100 for myself!  It was hot folks, night time was NOT any cooler.

So camp was set up, chatted some with my friend and the race started off pretty quickly.  The course was a  7 miles loop that was a lollipop.  You had a mile or so of the stick, then a loop with an aid station about half way around.  Once you got back to the start and main aid station, each runner was required to weigh in.  This was new for me, but they wanted to make sure everyone was safe and not either losing or gaining too much weight.  Sections of the course were not shaded and it got very hot.  So hot I remember it was almost hard to breath. I would tell myself over and over that if those fire fighter could go in that burning building on 9/11 to save others, I could run this!  I did say it was 107?  In Texas they would say the “Real Feel” is 109 or whatever.  In Georgia we say it feels like 109, they call it the “Real Feel”.  Whatever you call it, baby it was HOT!  With a noon start time, you were thankful you only had 1/2 of that first day in the sun.

It was nice during the first mile in and out to pass other runners and see people but mostly it was just a countdown of running 10 loops.  I’d see my friend Rachel when we were both in the out and back section and see how she was.  She was doing the 100 miler so she was pacing herself for the long run.  I came in to the main aid station and my friend would be a great help each time getting my pack refilled with ice and tailwind. My Nathan pack has an ice pouch in it that’s right against your back, and each aid station I’d refill it with ice.  I’d try to eat what I could but my stomach was in the best shape.  The first several loops that I came in, I remember a guy (who seemed obviously a volunteer) would come up to me and tell me I was doing great, looking good and keep it up.  I was so focused on what I was doing getting what I needed that I really hardly looked up at him.  After I got a few more loops behind me, I was a little more relaxed when I came in.  I looked up at him and finally noticed his shirt.  He had on a Cruel Jewel shirt.  Now I have to say this, I’m NOT an observant person and I’m terrible with names.  So when I saw his shirt, I immediately said something about it to him.  He said to me, “yeah, remember you lent me your poles!”  Steven Monte and I had become FB friends after Cruel Jewel but I just hadn’t put it together.  The ultra running world is so cool, if it wasn’t 107 degrees I might have gotten chills just then.  It was started to become night time and immediately feeling bonded to Steven I asked him about pacing or if he knew someone who might go a loop or two with me later on.  When I finally came in off my 6th loop my friend Rachel was there at the medical tent.  She told me she was done.  Injured and dropping.  I was heartbroken for her but understood, we sometimes have to make that call.  I knew she was planning on a pacer later in the race, and the thought immediately came to me to ask if her pacer would still be interested in pacing someone.  Again, such an awesome running community.  Texas I don’t love your heat but I love your people!!!

I had lost a few pounds and the RD was starting to give me a little grief about it.  I knew I wasn’t eating good, so I made a major effort to really be drinking my tailwind to get some calories in. When I finally came off my 7th loop, Andy Rose was waiting and ready to pace me.  Only two more loops I had to keep moving.  It was such a blessing sharing those last loops with Andy and getting to know him.  I moved as fast as I could and Andy thought it was much faster than he expected.  Being a looped course, I had no idea where I was as far as position, I was just focused on finishing. My feet were beginning to really hurt, with part of the loop having heaving gravel sections and the combination of the heat.  They weren’t blistered at all just hurting.  The overnight heat proved to be nearly as relentless as the daytime heat and I knew I wanted to be done before the sun came up.  When I finally crossed the finish line I was surprised to hear that I had finished 3rd overall female and 5th place overall.  It was a hot one and the heat had taken its toll on many runners.  The 100 mile race ended with only one single female finisher, Julie Koepke.  Many runners had dropped down to the 100K.

It’s Texas what did you expect for an award?!?!