Months of training, planning and running other races all leading up to here. Not only the longest run I’d ever done, the toughest with 40,000 ft of elevation change. From the moment I signed up for this race, we received emails about how we were all going to die, train harder. The race director, Sean Blanton aka Run Bum took great pleasure in telling us how we would surely die on this tough course.

I had originally signed up thinking I would run this race with my friend, Laura. Early on when she had gotten injured I made plans to try and run the race with our friend Lisa, who Laura and I had both met on our very first ultra race. Of course you plan to run together but you also have to be prepared for things to go wrong, someone not feeling well, or even worse and injury. Ed, my husband, had already agreed from the moment I first signed up for the Death Race to be my crew and I had one friend who I had hoped would be able to pace me for the final 20 miles.

Weeks before the race I found a new pacer as my original buddy came up injured. Then to make our nerves even more on edge, the week of the race, as the weather was rainy and not looking good for race day, they reverse the course. I’m still not sure if that made the whole thing more stressful or less. I had fallen so deep into the hype I no longer knew what to expect. I could no longer change things, so I had to go with it, trust my training and stay focused.

Ed and I drove up to Amicalola State Park on Friday afternoon. The car was packed with everything I could imagine I would need. There were 3 aid stations that had crew access. We had planned that after the first aid station at mile 23ish, Ed would need to circle into Dahlonega and pick up my pacer Carrie to meet up with us at Point Bravo Aid Station, mile 43.

Lisa met us at the Lodge in the State Park around 4pm. We had a mandatory pre-race meeting that we had to attend that night, then get dinner and some sleep. Before we did that, our first plan was to get our packs ready, and make final decisions on what to wear and bring. We also had to get Lisa’s stuff moved to our car so Ed could help crew her as well as me. Lisa had crew planning to come up later in the race and meet her by the time we got to Point Bravo, but for now we would share crew.

The meeting was filled with runners. I think we looked more like deer in head lights as Sean when over the course markings, other details along with the explanation of why they had to reverse the course. He told us about the course mileage. He doesn’t use a GPS watch so the mileage they list between AS is “ish” but the cutoff times at the Aid Stations were firm.

Race morning Lisa and I get up and head to the visitors center at the lower part of the park. The race would start there and climb up 600 some stairs to the top, then run back down the east side trail so that we can run the road back up to the top again. It was raining and the start was slightly delayed waiting on the shuttle buses bringing people who stayed at the finish. Finally we all gather at the start and we are off. We ran a short distance on the road before hitting the stairs. Lisa and I pretty much run the same pace, she helps keep me from going out to fast in the beginning. We stay moving as we climb the stairs and chat with other runners as we are all crammed into the stairs that never seem to end. Finally at the top we head down the trail which is probably some of the most rocky technical section of the course. Once down we hit the road and head to the top again. This time more of a fast hiking pace up the road that is far too steep to run, for us anyway. Once we finally get to the dirt road, well basically the fire roads, we settle into an easy running pace. Lisa has her watch set to remind us to eat every 30 minutes. It sounds like a lot, but they are small amounts of something to eat, and we’ve learned to stay on top of fuel and nutrition. Before long we are at our first Aid Station, Nimblewill Gap. We were both good, looked over the AS table and grabbed a cookie and kept going. We had come into that AS around 2 hours, a full hour and 45 minutes ahead of where we needed to be.

Now from Nimblewill Gap to Jake Bull AS is mostly downhill for 8 miles. We again settled into an easy running pace, not too fast to wear ourselves out but we kept a running pace. The trails were beginning to get wetter and more and more muddy at this point. Within a mile or so, a runner came up behind us and let us know that Lisa’s jacket was falling out of her pack. I looked at her and immediately recognized her as my Facebook friend, Stephanie. We had chatted before on FB after she had been the first female finisher in the Georgia Jewel back in the fall. She settled in and ran with us, as she was running solo and was so happy to find some company. We seemed to make that downhill stretch to Jake Bull in no time. We each grabbed what we needed quickly at AS and were ready to keep moving. The next section was beginning to have larger puddles in the roads and lots of hills going into Winding Stair Gap which was mile 23 and our first crew stop. 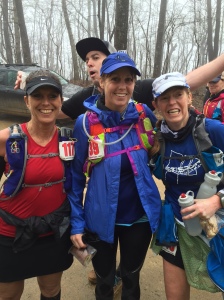 Stephanie met up with her crew here and Lisa and I quickly got what we needed from Ed. Back on the road again, we had another 6.5 miles to Long Creek AS, as the roads got muddier as we went. I had taken off my rain jacket at one point and we were all totally soaked. I put it back on just to keep warm as being wet was giving me chills. Just after the next AS we were finally getting onto the Benton Mackaye trail which were some beautiful single track trail that we were all really enjoying after the 30ish miles on the muddy fire roads. Sapling Gap was at mile 38 and the last AS before we would get to Point Bravo where our crew and pacers would meet us. This awesome AS had grilled cheese sandwiches that we all enjoyed. Still on the Benton Mackaye trail, we came to the swinging bridge where we came across a couple other runners who were looking at a snake. Good thing no one had stomach issues that bridge would have not been fun.

Just a few more miles and we were at Point Bravo. We had at least 3 hours before the cutoffs and were so happy to see Carrie and Ed standing there to greet us. Lisa’s crew had not shown up yet, and this AS took us a little longer to get what we needed together. Our new friend Stephanie had gotten her pacer and headed out just before us, we wouldn’t get to see her again but we enjoyed some great miles with her. Lisa’s crew showed up just as we were leaving, but soon we were off. The next section, the Duncan Ridge Trail (DRT), also known as the Dragon’s Spine would be the toughest. But as it turned out tougher for reasons we weren’t expecting. We knew the climbs were steep and long, that we already knew. The trail is endless up and down, thus the Dragon’s Spine, again we knew this. We would be doing it in the dark, that we knew as well. But the fog and the mud I don’t think we were quite prepared for. As soon as it was dark and we turned on our lights, we couldn’t see a thing. Trying to adjust to seeing where we were going, we were quickly off the trail, along with Brad and his pacer who was now with us. A little back tracking and we were back on the trail. Following the trail markers and keeping on the trail in the heavy fog took some work, but we finally adjusted and settled into a steady pace. Lisa and I are both strong hikers and we stayed steady. Carrie led the way as we traveled over the DRT. We got to Fish Gap and got some food and coke before heading off towards Mulkey Gap, our last time to see our crew. We just kept moving, that’s what everyone who had done the GDR before had told us, just keep moving. Mulkey Gap was only a few miles and we seemed to be there in no time. We got to our crew and I made a shoe change, unhappy with the shoes I had changed into at Point Bravo. We had gotten to that point in good time, but some rough trails and sections were still ahead of us now.

The next 5 miles were very muddy and slippery. We all had our trekking poles and were using them to keep upright and at times keep from slipping off the side of the trail. This had to be our slowest 5 miles, but as the night wore on it seemed later sections were endless. Finally to White Oak Stomp, we are still several hours ahead of cutoff times and not worrying about the time at all. More grilled cheese and even bacon at this stop. Also Lisa had been looking forward all day to the pie that was promised to be at this AS, it was however pie day, 3/14/15! Apple pie and pumpkin pie, yes please! But before we got to our pie, we were offered shots of Fire Ball! Carrie and I were all smiles!

We were pointed to the trail and told the next mile was all uphill, very steep climb but after that it was downhill! Off we went. On a mission, we stayed strong, Carrie led us up the hill and to the top of Coosa Bald. One nice thing about doing it in the dark and fog, you have no idea where the top it, so you just keep going. But possibly worse than the climb would be the next 3.5 to 4 miles of downhill. Coosa Backcountry loop is brutal up, but down is treacherous. My now your legs are tired, the trail is muddy and slippery and this section was the most painful for me. My knees were achy and I was ready to hit some flat or even uphill again. Steep downhill was not fun. Finally the last AS Wolf Creek. Carrie crabbed some M&M’s and we had to cross a very cold creek leaving there. Only 3.5 miles left, we got this girls. Three miles of uphill but it would all be over soon. We began to pass runners as we climb at a steady pass up the hill, finally reaching the top and a short distance into Vogel Park were we would soon find the finish line. A finish line was never so sweet. Not knowing if you could do it, would we get cut at an AS, but we never waivered in our determination. We were never negative or doubted for a minute that we would keep going. We finished in just under 21 hours, qualifying us for the Western States Lottery.